Why You Should See Spare Parts 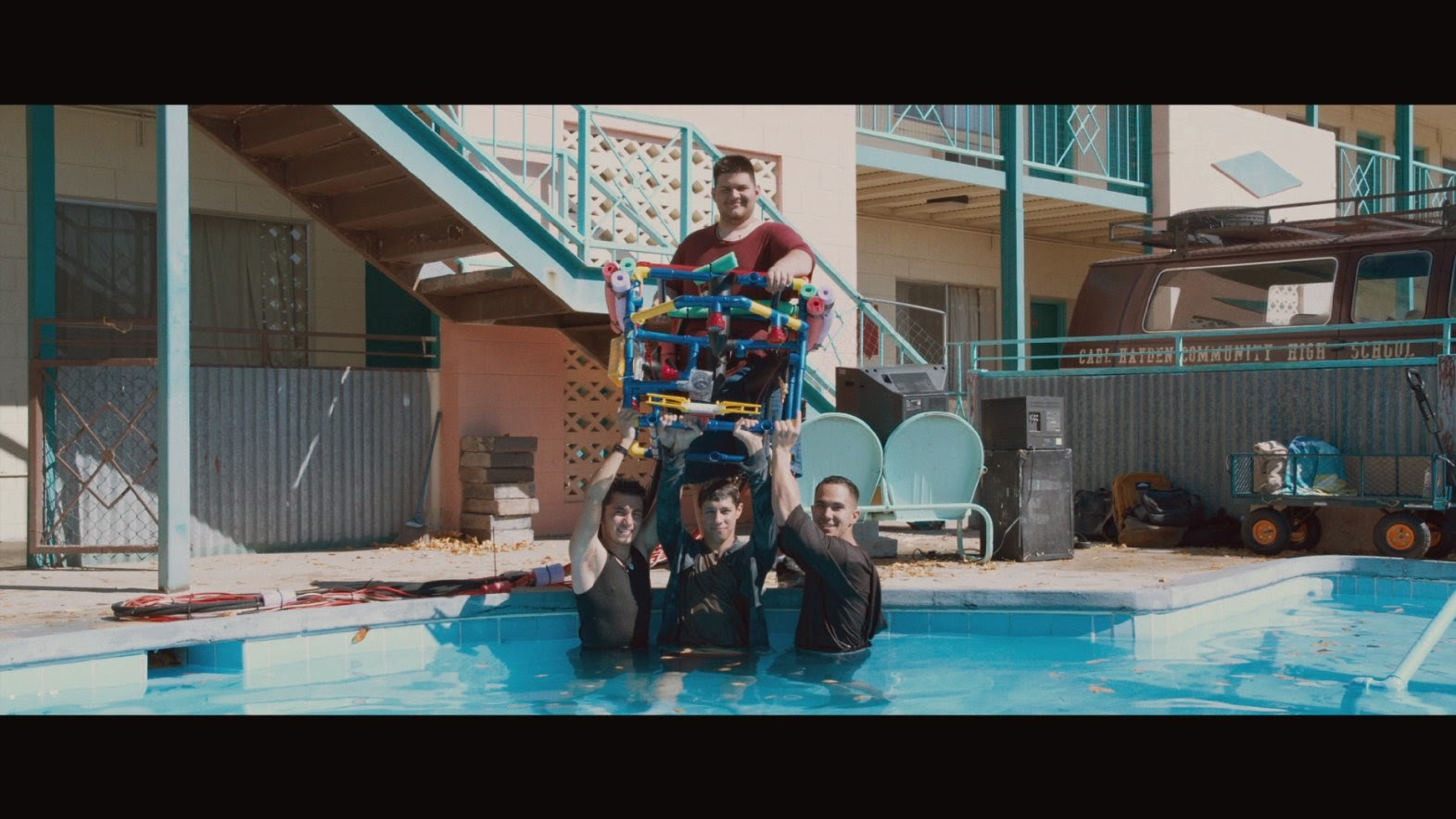 Oscar's dream is to join the US Army and serve the country -- his bedroom is filled with recruiting posters, his ROTC uniform kept pristine, his haircut and his demeanor regulation at all times.  He is driven, responsible, and a natural leader.

Cristian is a stereotypical nerd, his days spent writing software and dodging (usually unsuccessfully) his personal bully.  His is a gifted mind, even if, after a brief encounter with near electrocution, he admits he is a theorist at heart.  (Note: I may have had a similar experience and realization some years in the past myself.)

Lorenzo has talented hands and a mind that can compose parts into an elegant whole, whether he's cooking a meal with fresh ingredients or fixing a car.  The elder son, he is constantly vexed by the challenge of keeping his hotheaded little brother out of trouble.

Luis is a quiet giant.  Kindhearted, he tries to help those who are in trouble, including protecting the bullied from the bullies.  But he can only be in one place at a time, and he's not the fastest draw when it comes to thinking things through.

Spare Parts is the (based on a) true story of how these four high school students banded together to build a remotely-operated unmanned underwater vehicle with what materials they could scrounge and entered it into an annual competition against teams from some of the top engineering universities (that's right, I said universities) in the country under the watchful eye of their club sponsor, Dr. Fredi Cameron (one of the liberties taken in the film adaptation of the story was the merging to two different teachers, one Iranian and one Caucasian, into George Lopez).  Because of the ethnicity of the characters involved, it is frequently being compared to Stand and Deliver, which is not terribly apt.  Instead, I would suggest it's Stand and Deliver crossed with Race the Sun but made by the folks who brought you Disney's Remember the Titans.

From that perspective, Spare Parts delivers the mail, bringing to the screen an entertaining feel-good film of can-do spirit and comedic moments among a group of individuals who genuinely come to care for each other while working toward their common goal for their own reasons.  It manages to make the competition engaging, even though the results are well-known, widely published, and frequently spoiled even by the film's own press material.  It's certainly resonated with the small audience it's brought in, currently sitting at 94% audience approval on Rotten Tomatoes.  However, it's received only a lukewarm reception from critics, and that's because of its missed opportunity, because Spare Parts could have been a very important film if its makers had wanted to go that route.

You see, Oscar, Cristian, Lorenzo, and Luis are all undocumented youths.  Brought to America at a very young age, they now struggle to figure out how to achieve the futures they'd otherwise be fully capable of in a country that's the only one they really know but that doesn't want them at the same time.  While the film doesn't shy away from that fact (Oscar leads off the movie attempting to enlist under the mistaken belief that the pressures of fighting two simultaneous actions has led the Army to allow undocumented residents to join, triggering a series of events that causes him to abandon his home and sleep on the streets to avoid deportation; Lorenzo struggles to keep his sibling out of trouble because his brother, the only actual U.S. citizen in the family, must keep his record clean to ensure he can support the family if it comes to it; Cristian, though dreaming of college, sleeps in a hovel kept warm by a portable heater), it surrounds these story elements with lighthearted fare that makes you look to see if this is a Disney film.

The movie also stops at the convenient family-friendly point in the team's story, and the struggles of the four as they entered adulthood are glossed over by the obligatory "where are they now" end notes.  In particular, it fails to capture Oscar's post-high school life,which deserves an entire movie itself.  A short on-screen blurb can't accurately portray that Oscar did make it into college, paying his way with construction jobs, and earned an engineering degree, got married, and had a child.  That he then self-deported so that he could go to the consulate in his home country and apply for entry by the book.  That at that point he was told that since he'd entered the country illegally as a child, he'd have to wait a decade to apply for legal entry as punishment.  That, as he toiled away as a day laborer in Mexico, Senator Dick Durbin took notice of his story and asked INS to reconsider, then used Oscar's story as ammunition when he stumped for the Dream Act in Congress.  That Oscar became a citizen and did join the Army Airborne, including serving a tour in Afghanistan.

I can see the critics' point that a story like this merits a more important movie.  But I think that is a little unfair.  After all, it does capture in an engaging, fairly family-oriented PG-13 movie a very important truth: that the undocumented immigrants of America are not all the hardened criminals demonized by a portion of the media and political elite.  Instead, that population possesses the same diversity of actions, of personality, of dreams as that of legal immigrants.  I recommend seeing it, but seeing it with the right expectations in mind.
Posted by JL Franke at 7:05 PM