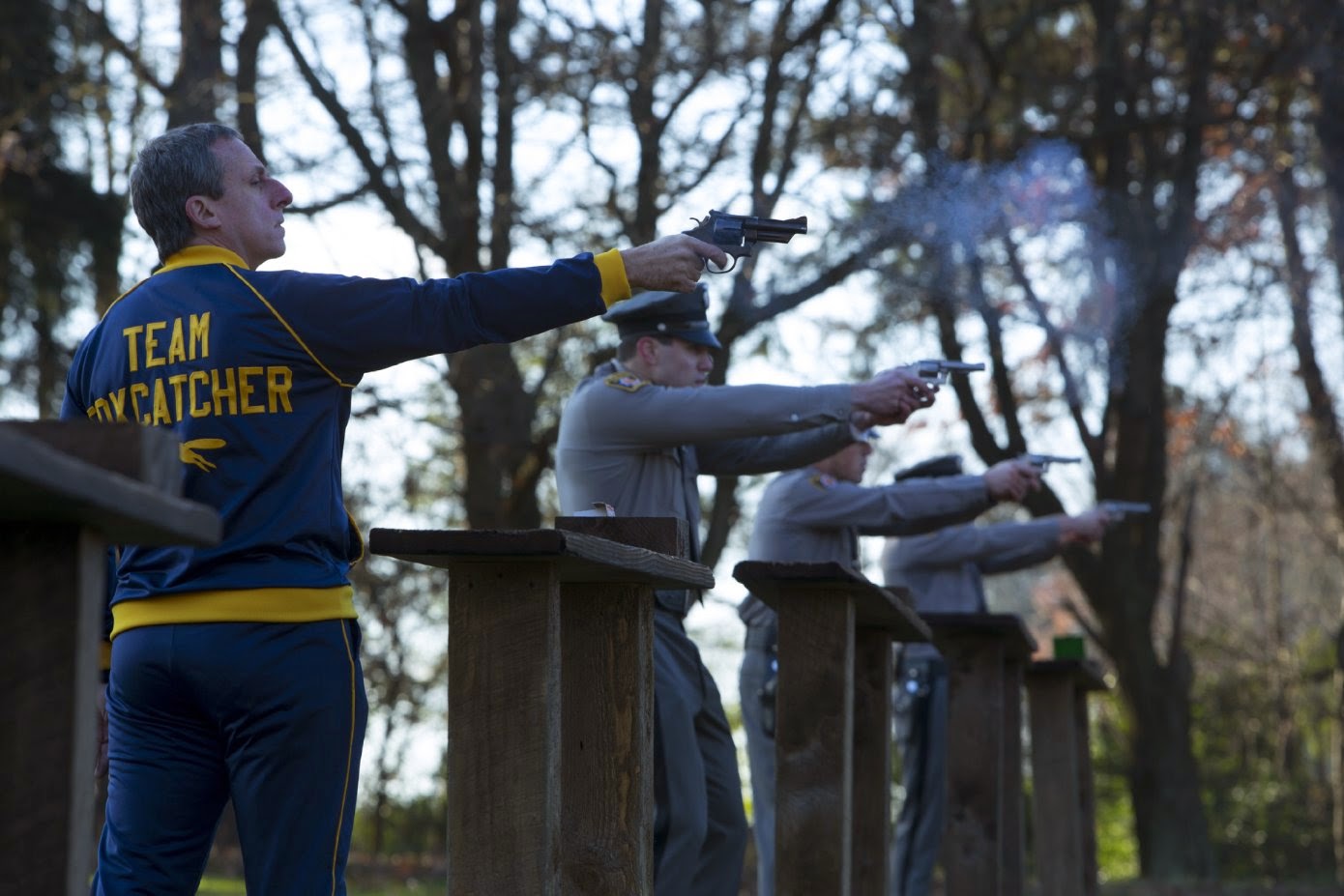 Foxcatcher was a bit of a puzzle to me when the Oscar nominations were announced.  Nominations for best director, screenplay (adapted), actor, and supporting actor, as well as makeup and hair, but none for Best Picture.  If the script, direction, and acting were all top notch, how could this not get a nod for the overall film?  The answer, as it turns out, is that Foxcatcher is a bit of a mess as a movie.

The problem is that the film doesn't really know what it wants to be.  Instead, the film meanders from one throughline to another, never establishing a clear path that fully embodies a particular theme.  And that muddies things considerably.

Based almost solely on the autobiography of wrestler Mark Schultz, Foxcatcher is mostly the story of a moody, slightly imbalanced Olympic wrestler who grew up in a broken home and was overshadowed throughout his career by his older brother Dave, who was also a championship wrestler as well as a highly effective wrestling coach.  Unfortunately, there's not much payoff to Mark's story, so we're mostly treated to extended scenes of Mark staring moodily at things in his surroundings or walking around with his head down.  Channing Tatum is not a good enough actor to make this interesting on the screen, so much of Mark's extensive solo screen time comes off as filler.

Of much more interest is the character of John E. du Pont, the eccentric/crazed heir to the du Pont fortune who sponsors Mark (and, eventually, brother Dave) in hopes of covering himself in the glory of being an Olympic champion's "coach" and pleasing his mother, who thinks anything related to wrestling is beneath a du Pont.  Du Pont's story is one of someone savaged psychologically by his birthright -- someone with no responsibilities yet impossible expectation, a dilettante with very common interests, who has immense power due to his wealth and influence but who has little authority over anyone he can't simply buy.  Steve Carell is amazingly deft at sinking himself into du Pont's very ill-at-ease persona, and his Best Actor nomination is well earned.  A more effective film would have put the focus squarely on du Pont and his foibles that led him to committing the murder that made the Foxcatcher name notorious.  After all, this was a man who consulted routinely with local police and with the military, yet who found himself a common fugitive from the law.  Du Pont, as played by Carell, has considerable depth worth exploring fully.  Unfortunately, the filmmakers decided to tell the story from Mark's perspective, so du Pont is forced into the background often throughout the movie.

And that pushing into the scenery robs the climactic murder of some of its power.  The relationship between du Pont and eventual victim Dave Schultz (played quietly by Mark Ruffalo) needed more exploration.  Was du Pont upset because Schultz put his family time over his relationship with his benefactor?  Was it because he didn't like how Dave portrayed du Pont's role as "coach" of Team Foxcatcher, eating into the facade du Pont so desperately wanted to build?  Was it because Dave acted as if he considered himself du Pont's equal in their interactions, grabbing him by the shoulder in an attempt to comfort him during a time of loss, something no one else outside of the family would dare?  None of these triggers are explored, so when the shooting does occur, it has the shocking inexplicability of a random drive-by rather than the logical cap to a character arc.  Had du Pont and his relationship with Dave Schultz been given more room to develop, Foxcatcher would have been a much more noteworthy film.  Instead, by making Mark the viewpoint character, much of the most interesting aspects of the overall story remain opaque to us.

As a result, Foxcatcher does not live up to its accolades in the end, and I don't expect it to make much of a splash at the Oscars.  Its issues could have been addressed with a more expansive script and by different choices in direction, so I question whether the spots taken up by the film's nominations in those categories couldn't have gone to more deserving recipients.  While ably acted by Ruffalo, the role of Dave Schultz is not very meaty, so I can't imagine Ruffalo having much of a shot against some of the more dynamic performances nominated in the supporting category.  Similarly, the makeup and hair on the film is well done, but one has to question how well putting a fake nose on Steve Carell will do against the historic glitz of The Grand Budapest Hotel and the alien populace of Guardians of the Galaxy.

Carell's situation is much more interesting.  Carell's performance is outstanding, but he is up against some very strong competition.  I have to wonder if he wouldn't have been a lock for an Oscar if the producers had taken the defensible stance that his was a supporting role, letting him battle it out with J.K. Simmons and company instead.

Overall, I would recommend watching Foxcatcher for Carell's performance.  Just be prepared to mourn the movie it could have been.