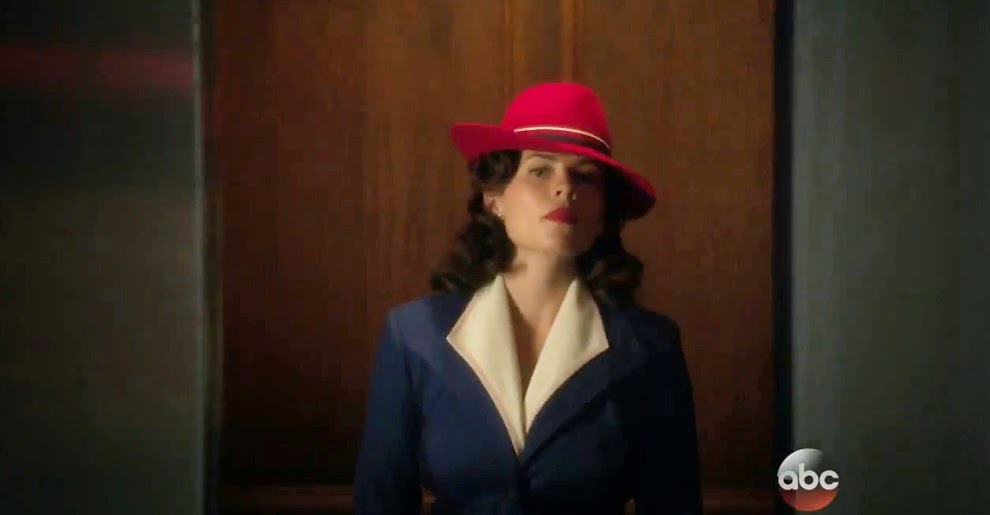 Given the nearly perfect short film Agent Carter that we were treated to in 2013, the television series Agent Carter had a lot to live up to.  Did it?  Not quite.  But it didn't miss to the extent that the series can't be enjoyable.

I think it was a poor choice on the part of the Marvel/ABC/Disney conglomerate to make the series be a prequel to the short.  In the film, Peggy has been working for some time at SSR and has been passed over for assignment right and left, itching to get in on the action.  She's kept out of the action by her male superior and peers because none of them can fathom a woman being capable as a field agent.  To force her way into their missions would be insubordinate and potentially end her career at SSR.  As such, she has to sneak in a little action on the side.  The short builds around that point.

And that's the challenge that setting the series prior to the short presents: to be in the same continuity as the short, the Peggy of the series has to somehow never prove her competence to her peers and superiors.  To do otherwise creates a situation in which the agents of SSR see Peggy's competence and yet still reject it.

That may seem a small difference, but it's critical.  In the one case, Peggy traverses the hero's journey of having to prove herself worthy against deeply ingrained societal beliefs.  In the other, Peggy has to deal with the fact that her fellow agents are willful idiots, a veritable secret service of Barney Fifes.  In terms of the show, it's the difference between Agent Carter being an action-adventure-thriller with a feminist viewpoint and a sitcom.

Fortunately, tonight's episodes mostly keep Carter separated from her coworkers, though it does not avoid becoming a bit heavy handed with the anti-sexism message, which permeated both episodes tonight to the point of nearly drowning the plot at times.  At work, Peggy has to deal with the fact most of her colleagues think of her as more or less Captain America's fluffer and demand that she do secretarial work.  At home, her roommate has lost a job because the men have returned from war and need their jobs.  Her best friend (such as it is) is a waitress who's simultaneously verbally degraded and groped by her customer.  Ubiquitous on the radio is The Adventures of Captain America, with Cap's plucky girlfriend always in need of a rescue by her brawny hero.  Peggy's new landlady is concerned with Peggy's potentially lose morals and tsks at Peggy being employed (Thank God it's only until she's married).  Almost every man Carter encounters in the first two hours either severely underestimates her or makes advances of some kind to her (though curiously not the villains of the episodes -- could secret terrorist organizations be more enlightened than the good old US of A in the Marvel Universe?).

None of this happens in the background, which would be fine to build and maintain a feeling of a mountain that Peggy must climb to reach the series' (and the short's) triumphant resolution.  But instead, each instance is dragged center stage, requiring overt response by the cast (Peggy in particular).  Throughout, the show takes great pains to show how unique Peggy is in this male-dominated world, from the opening shot of her walking down the street, a woman in a bright red hat surrounded by men of vaguely similar appearance, all dressed in black and sporting black fedoras (though only for that opening shot, as the next shot, from farther away, shows that everyone on the street is dressed differently and is more gender-mixed).  Head, meet hammer.  This repeated trotting out of what should have been subtext disrupts the flow of the plot, compared to the brilliant pacing of the short.

As for the plot, while it could use more fleshing out overall, it whetted the appetite for things to hopefully pick of the pace later.  Howard Stark is a wanted man and needs Peggy to help him recover lost and misused technology in a sort of 1950s version of The Armor Wars (sans armor, of course).  She is aided in this by one Edwin Jarvis, one of the few non-sexist men in the series, and who is a bit of an enigma, sometimes more competent at spycraft than a butler should be, sometimes bordering on the verge of bumbling.  The pilot makes it clear that he is hiding something.  I hope the show does not take long in letting us in on what it is.

The pair find themselves facing off against the villainy of Leviathan, a secret terrorist organization oddly reminiscent of Hydra that comics fans will already be familiar with.  Given Leviathan's comics origin, it should be of interest that one of the characters we're introduced to in the first two hours is Stark's colleague Anton Vanko.

There are a couple examples of cool tech, but the show is surprisingly sparse in that regard.  Tonight's macguffin is of course Stark-tech, and Agent Carter wields a couple more examples, but often things were much more mundane.  Peggy uses doctored lipstick at one point, ensuring that cliche would live on another generation.  Even the bad guys did not wield impressive technology -- the teleprinter and vocoder wielded in tonight's episodes were well-engineered examples, but both were invented well before World War II.  For all the early SHIELD gadgets that Agents of SHIELD likes to trot out, I would have expected more.

Given the length of these complaints, one would think I hated the show, but there's also a lot to like.  Despite the heavy handedness of the messaging, enough of the plot comes through to make one interested in seeing what happens next.  The action sequences are largely well-done and entertaining.  And Hayley Atwell is again hypnotic as Peggy, continuing her breakout performance in the first Captain America movie as well as the Agent Carter short.  It's really too bad that she's only being given a seven hour miniseries in which to inhabit the character.  If ABC can't make it work, one of the internet streaming providers should really pick this up as an ongoing.

Overall, I recommend Agent Carter for the few folks who would enjoy a period spy caper and haven't already watched/DVRed it.  We have just five more hours with Agent Carter and her exploits, though I hope we'll see her again.
Posted by JL Franke at 8:46 PM