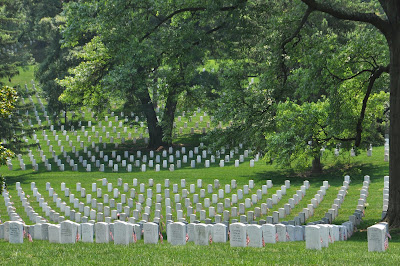 While there are many monuments and sites in Washington, DC meant to stir the emotions, there are precisely two locations that elicit feelings of humble awe.  One is the Holocaust Museum, with its testimony to the overwhelming suffering of a people at the hands of an evil, powerful few.  The other is Arlington National Cemetery, its row upon row of chalk white headstones a collective testament to the sacrifice of generations of fighting Americans to the preservation of the Union, defense of freedom, and safeguarding of the American way of life.

Memorial Day has been set aside to honor those fallen heroes each year, but there's no reason to limit it to just that one day.  Hollywood has offered us a buffet of movies and miniseries that provide the opportunity to stop and reflect on the sacrifices of our warriors throughout American history.  Here are six works to take you through a Memorial Week if you choose. 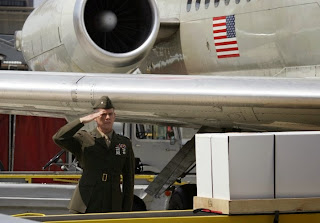 The most directly relevant film is Taking Chance, directed by Ross Katz for HBO.  Kevin Bacon stars as LtCol Michael Strobl, whose journal when serving as an escort for the remains of PFC Chance Phelps served as the basis for the movie's script, which was co-authored by Strobl.  Phelps was killed in action during the Battle of Ramadi, and the film is as much about what happened to his remains afterward as it is about Strobl's journey as his escort.  The film captures the kind of care the military provides its fallen, as well as the way the deceased is honored by the everyday Americans that Strobl encounters throughout his trip.  This outpouring of respect and caring impresses Strobl while he questions his own career decisions, wondering if he's let his country down by taking office assignments since his tour in Desert Storm while other men and women go into battle. There are several opportunities throughout for misty eyes, in particular a scene set during the drive from the Billings airport to Chance's home town of Dubois, Wyoming in which the drivers of the other vehicles on the road, understanding the situation implicitly, form an impromptu procession for the fallen Marine and his escort. 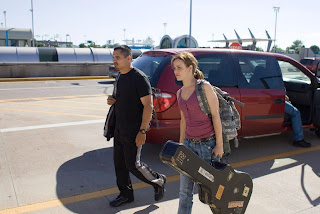 The Lucky Ones is a highly imperfect movie by Neil Burger, who makes highly imperfect movies (The Illusionist, anyone?).  But it's on this list because of the storyline involving Rachel McAdams as PFC Colee Dunn, who has ventured on the road with fellow soldiers Tim Robbins and Michael Pena to return personal effects of her boyfriend, who was killed in action saving her life.  Dunn learns that her boyfriend wasn't exactly the most honest guy around, and it's that difficulty of matching his romantic game playing with his sacrifice and status as a war hero that gives the film the dramatic heft it sorely lacks at other times, when it meanders between comedy and drama.  But I think it's important to remember that the armed services are filled with people all along the ethical spectrum and that while their valor in battle doesn't change their individual moral compass, their impropriety also shouldn't take away from their heroism and sacrifice in action.  That truth is underscored nicely throughout The Lucky Ones. 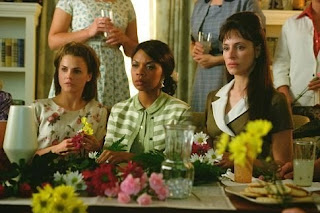 Much of We Were Soldiers is a pretty engaging traditional war film that comes the closest to a John Wayne movie that modern film making has produced.  But it's on this list because of the interspersed scenes set back at home, where Madeleine Stowe plays Julia Compton Moore, wife of LtCol Hal Moore (whose book We Were Soldiers Once...And Young was the basis for the movie).  While her husband was off leading the 7th Cavalry in the Battle of Ia Drang, Julia discovered how inadequately the Army had prepared for the notification of casualties to their families, and set about correcting it personally.  Because of her efforts, the Pentagon set up a casualty notification system that is still in use today.  The film only shows the time she spent personally comforting and mourning with the women whose husbands lost their lives fighting for her husband, but it contrasts greatly with the Pentagon's original plan to use cab drivers bearing telegrams.  The rest of the film is worth watching as well, with Mel Gibson chewing as much scenery as possible, Sam Elliott playing the most Sam Elliott character ever, and Barry Pepper playing the only reporter in Viet Nam to really get it in Moore's view. 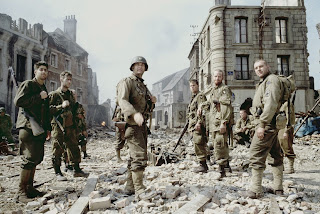 Saving Private Ryan belongs on most lists of war movies as its depiction of the invasion of Normandy earned its legendary status even if later parts of the film were muddied by Stephen Spielberg getting a little too Spielbergian.  It's on this list because of its overarching plot driven by the military adopting an ad hoc Sole Survivor Policy (the official one would not be enacted until 1948), as it did in the real-life case of the Niland brothers, whose story partly inspired this film.  Its theme of who should be asked to make sacrifices and who should be protected from doing so provides much of the philosophical meat of the film.  With its opening and closing scenes in Normandy American Cemetery, the movie challenges its survivors to live lives that merit those sacrifices. 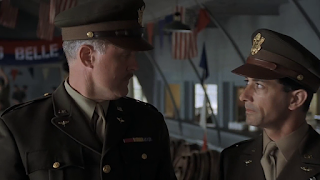 Most of Memphis Belle is a traditional war flick with an engaging cast and a straightforward plot that allows most of the action to take place in the eponymous bomber while still letting Harry Connick Jr. do a big band number.  It's on this list because of one specific scene.  John Lithgow's LTC Bruce Derringer, an Army publicist wanting to milk the Memphis Belle returning its crew from its 25th and final mission, accuses COL Craig Harriman (David Strathairn) of only caring about his statistics, Harriman whips out a folder containing responses from families to the many condolence letters he's written.  As the weight of Harriman's responsibilities and the mourning of so many back home sink into Derringer, Lithgow's constantly shifting facial expression openly conveys his thoughts. 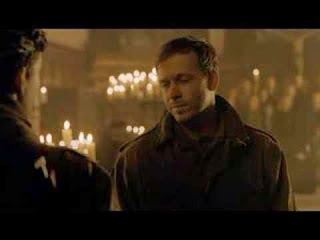 Band of Brothers is a worthy viewing from start to finish -- well written, well acted, and with a very believable view of the action that Easy Company (506th PIR) went through from start to end of World War II.  There are several episodes and scenes with a solid Memorial Day theme, but perhaps the one that best reflect the losses sustained by the unit is at the end of the episode titled "The Breaking Point", where Easy, fresh off of taking the Belgian town of Foy, nurse their wounds in a convent listening to a local children's choir.  1 SG Carwood Lipton is attempting to update the Company's roster, and as he ticks off the dead, the actors playing those roles slowly disappear from where the unit is sitting in the pews.  It's a dramatic visual indication of the extent of Easy Company's losses during the Battle of the Bulge, and it's unfortunately neither the first nor the last batch of casualties the unit experienced.
Posted by JL Franke at 9:39 PM