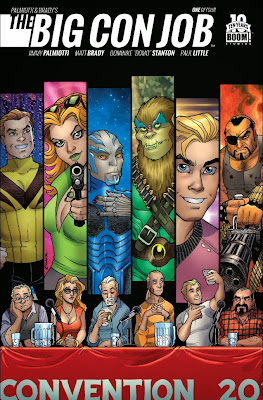 Boom! has a new miniseries out, and it's one that's hit home.

If you're a fan of pretty much any part of geek culture, then you've most likely already experienced at least one convention in your life.  They're a great opportunity to commiserate with people of like interests and lifestyles.  Shopping the vendors who show up hocking their collectibles is always entertaining, and sometimes turns up a gem.  And, of course, they provide an opportunity for fans and their favorite stars/directors/writers/artists to meet and bond over film and book announcements, panel discussions, and Q&As.

But there's a less glamorous side to the convention business that surrounds the way of life for former stars who are on or past the downside of their careers.  These folks are not there to promote the next big thing they want you to plunk down your entertainment dollars for.  They're not there to talk to you about what they're doing next at all.  Instead, they are there because our periodic need to relive the past gives them a chance at an income as well as some hope of retaining (or regaining) some of their former glory.  While the stars of today pop into the con for just a few hours on one or two days, these stars of yesterday typically stay from start to finish, usually waiting at their booths for a fan to come up and talk, hoping to sell an autograph or a photo opportunity.  For the fans, meeting these former stars provides a short pop of nostalgia before they wander along to their next panel session and eventually wonder what to do with their photo of a Gary Coleman who'd clearly seen better days.

For the most part, I am not terribly comfortable with this part of the convention life and tend to avoid these sections of the exhibit floor.  It's too easy to see these forgotten stars of yesterday sitting patiently in their booths as some sort of side show or zoo exhibit.  It's difficult to come up with something interesting to ask them or talk to them about, as typically the show or movie that they're known for has been picked through like an Old Navy sale item by the fan press a thousand times over the years.

Even more awkward are the interactions with the actresses and wrestling divas whose career arc primarily centered around their sex appeal.  Take, for example, an actress I was excited to see on the guest list for a con a few years ago.  She did not have significant mainstream success, but she was known among scream queen circles, and I pretty much exclusively knew her from her time on a late-night soap opera I enjoyed watching on a certain adult channel that for some reason came through unscrambled on my television.

I spotted her at the con walking back in from lunch and was on my way to say hi when I stopped myself.  What was I going to say to her, "Hi, just wanted to thank you for getting me through lonely nights in college!"?  Yeah, that wasn't going to happen.  For many of the stars, "I enjoyed your work from years ago," is about the only thing I have for them, because their work was too long ago to really remember any nuance or detail.  And it may be just me, but I find that kind of sad.  In any event, I declined to stop her and went back to browsing the vendors.  While it might not be awkward for her to meet fans who only remember her body of work one way, it certainly seemed awkward to me.

That's former sci-fi sex symbol Blaze Storm there greeting an enthusiastic fan.  She's one of several forgotten stars populating Jimmy Palmiotti and Matt Brady's miniseries The Con Job, out from Boom! Studios.  As veterans of many a convention, Palmiotti and Brady didn't have to look far to accurately capture the feel of geek conventions, especially this aspect of it.

The Con Job is a heist book, but one centered around the politics and economics of today's big business geek conventions, which in a way turns the book into a pseudo-documentary.  Palmiotti and Brady take time to introduce their characters (who are all easily recognizable pastiches of one or more real-life forgotten stars) and portray their struggles making their lives work in the years following their fame waning.  They also spend considerable time and page space discussing the downsides and pitfalls of convention life.  This doesn't make for breathtaking reading, but it does generate a great deal more sympathy if you know why these past-their-prime stars are complaining so much.

Ultimately, these former stars, with some convincing from an agent (I was going to say "possibly shady agent", but when do you ever see a non-shady agent?), decide to take what they believe is coming to them, using their access and former skills as thieves tools.  The tone of the book is such that I have no idea whether to expect a happy or sad ending, but I am invested in seeing what happens.  And I'll be rooting for the happy ending.

The first two issues are out.  Art by Domo Stanton, covers by Amanda Conner.
Posted by JL Franke at 12:24 PM