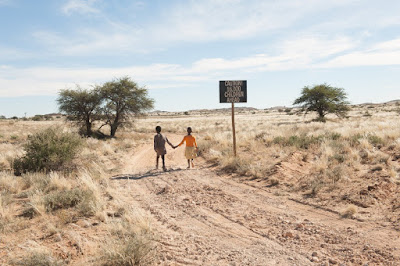 Two very good films that hit just below the Oscar line in 2014 have made it into the movie channel rotations this month.  I thought I'd take a moment to mention them.

When the film opens, both Knightley's and Ruffalo's are hitting rock bottom.  Knightley's just broken up with her boyfriend and songwriting partner Levine, who's becoming a pop star and enjoying the fruits of that success, so she ends up on Corden's couch with no real purpose in life.  Ruffalo is estranged from his wife Keener and daughter Steinfeld, and he's just been fired from the record label he helped found by his old partner (Mos Def).  Fortunately for them both, they find each other, as a songwriter whose works have soul and melodic potential and a producer with a gift of seeing the possibilities in the music he hears is a match made in heaven.  The relationship they build together throughout the film is complicated and not quite the traditional leading man-leading woman kind of pairing, and it makes the film worth watching.

Ruffalo's producer decides to help Knightley's songwriter make an album of her own, recruiting a number of "bored musicians" willing to work essentially for just the chance to do something different (and a promise of a backend deal).  They record the album guerrilla style on the streets of New York, which is very evocative of the Playing for Change recordings.

Throughout, the characters reflect on the meaning and value of music.  Knightley and Ruffalo wander nighttime Manhattan listening to each others' playlists and reflecting on the beauty of a life spent with a soundtrack.  Knightley criticizes Levine for turning her deep, meaningful song into a Maroon 5 pop track.  Corden throws a party and challenges everyone not to dance.  Steinfeld and Ruffalo bond over musicianship.  Knightley skewers Mos Def with questions about the value of a record label in the 21st century.  Begin Again is a film that must be appreciated with the ears as well as the eyes.


The Good Lie makes an odd pairing with Begin Again, but it's no less worthwhile.  Sacrificing name recognition for earnestness, Reese Witherspoon provides the only star power to the film, and she's just a supporting actress.

The Good Lie is about a group of children among the Lost Boys of Sudan whose villages are destroyed by civil war and must survive death squads, attempted forced recruitment into death squads, and the native dangers of the African wild as they attempt to find a new home.  Their journey, which takes up the first half of the film, brings them refugee camps and eventually the United States, where they attempt to form a new life that they're ill prepared for.

That's where Witherspoon comes in, as she has the responsibility to help three of the now-grown men find jobs, which is not an easy task considering most jobs require some familiarity with the American way of life and these guys have just spent most their lives as refugees in Africa.  Without intending to, Witherspoon and her boss (Corey Stoll) become personally invested in the lives of the men they're charged with finding employment for. 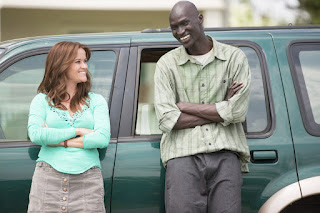 Given that structure, it would be easy for The Good Lie to fall into the trap of becoming just another "white people come and rescue the dark skinned victims" kind of a story, but thankfully, each of the Lost Boy characters are fully realized.  Mamere is ostensibly the leader of the group and wants to become a doctor after showing aptitude in the refugee camp infirmary, but he's wracked with guilt over the members of his family that he's lost in Africa, especially his brother.  Jeremiah is the thoughtful, quiet strength of the family, as well as its spiritual leader.  Paul is gifted with his hands, but suffers from PTSD from his experiences as a refugee, especially the loss of his brother to a lion attack.

The struggle by these three, as well as other refugees, to push past their scarred pasts and make a future for themselves in a foreign land provides the drama for the second half of the film.  I can't go into details of this part of the film or its ties to the movie's title without introducing significant spoilers, but suffice to say that it wraps together nicely both from a structural and thematic perspective.  The leaps ahead the characters make in their lives and the bonds they form provide the viewer with hope (and hope is sorely needed after that first half of the film). The result is a cinematic journey that I believe most in the audience will find worthwhile to have taken by film's end.