Patriotic Movies Don't Have to Be About War 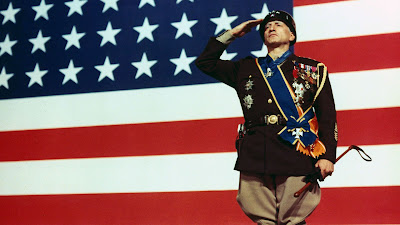 I started thinking about this when a friend posted on social media that in honor of Independence Day she was watching a recent war movie.  Why, I asked myself, did it have to be a war movie?  Don't get me wrong -- anyone who knows me knows how much I appreciate the men and women who keep this country safe, whether on the front lines or behind the scenes.  My question was why, when desiring to celebrate America, would one immediately jump to a war movie?  There are other options: movies that celebrate aspects of our great nation other than our bravery in battle.  And so this exploration of non-combat patriotic films was born.  I've chosen to categorize them based on what they're celebrating.

Based on the Tony-winning musical, 1776 envisions a world in which the Continental Congress sang and danced their way to American Independence.  William Daniels portrays the obnoxious and disliked John Adams who preens and cajoles his fellow patriots to formally declare independence from Britain.  Ken Howard, yet to become The White Shadow, plays a rather horny Thomas Jefferson who'd be fine with someone else writing the Declaration of Independence if it means getting the opportunity to be with his wife.  Formerly blacklisted Howard da Silva plays Ben Franklin, who rounds out the starring trio.  1776 is incredibly silly much of the time, but it does take its ultimate subject matter seriously and produces several poignant moments, such as when a courier from General Washington remembers his two fallen best friends, both lost during the Battle of Lexington.

While primarily sold as a biopic of our sixteenth president, Lincoln follows the push to get the 13th Amendment passed, outlawing slavery throughout the United States.  Daniel Day-Lewis won an Oscar for his compelling portrayal of Abraham Lincoln.  Sally Field (Mary Todd Lincoln) and Tommy Lee Jones (abolitionist and Radical Republican Thaddeus Stevens) were also nominated for their supporting roles.  For primarily featuring speeches and political negotiations, Lincoln is riveting viewing.  You almost find yourself worried that the amendment won't pass until you realize that of course it had to.  Lewis's Abraham Lincoln was one who was a cool strategist who was a self-taught genius that hid behind a gregarious storyteller facade.  At one important turning point, the President ponders on what Euclid would have to say.

You can almost think of Dave as a counterpoint to Lincoln.  While Lincoln showcased some supreme politicking to achieve a major goal, Dave asks what might happen if someone were to throw away politics altogether when running the country.  Kevin Kline pulls double duty as slimy President Bill Mitchell and as Dave Kovic, a temp agency owner and Mitchell doppelganger hired to impersonate the president while the leader of the free world sneaks off to spend an evening with his mistress.  President Mitchell experiences a stroke and Dave finds himself asked to keep up the deception by corrupt White House staffers.  They soon find that they can't control Dave like they think they can.

A Frank Capra-James Stewart classic, Mr. Smith follows Stewart's Jefferson Smith to the U.S. Senate, where the junior senator finds himself at the mercy of machine politics when his bill to use federal funds to finance a boys' camp runs afoul of a graft scheme involving the building of a dam at the same site.  This leads Senator Smith to his famous filibuster (and this is a true filibuster, not one of those lame "no one has to talk without end" filibusters the Senate currently entertains) in an attempt to delay the passing of the appropriations for the dam and to clear his name.

A biopic of the legendary composer George M. Cohan, Yankee Doodle Dandy features James Cagney showing why he wanted to be thought of first and foremost as a song and dance man.  Cohan, who was technically born late on July 3rd but who always claimed to have been born on the Fourth of July, wrote many popular patriotic songs, from the title number to "Over There" to "Grand Old Flag".  While Cagney portrays him as a bit of a hothead when he was young, the movie overall is a love song to "The Man Who Owned Broadway", providing a fitting epitaph to his career, as he died from cancer mere months after the film's release.  While the film tells Cohan's life linearly, it does feature a framing sequence in which Cohan, out of retirement to portray President Franklin Delano Roosevelt in Rodgers and Hart's I'd Rather Be Right, is asked to the White House to meet FDR himself and finds himself telling the President his life story.  Cagney is amazing throughout, showing dance moves and agility you don't see much of these days, including a quick tap dance down the stairs at the White House.

I've read the book and seen the movie, and they are two very different animals.  Still, The Right Stuff works as an ode to the brave pilots who broke the sound barrier and put us into space.  It features a who's who cast, with Sam Shepard as Chuck Yeager and Dennis Quaid, Ed Harris, Fred Ward, Scott Glenn, Scott Paulin, Lance Henriksen, and the not-as-successful Charles Frank as the Mercury 7, along with such actresses as Barbara Hershey, Veronica Cartwright, Kim Stanley, Pamela Reed, and Kathy Baker.  The cinematic Right Stuff honors the bravery and intelligence of America's pioneers into advanced flight and space travel, even if it omits mention of The New Nine (discussed so much in the Tom Wolfe book), who would go on to be probably the most impactful set of astronauts in America's space program.

Another space-oriented film, this tells the story of Homer Hickam, who grew up in a coal-mining town in West Virginia but managed to escape a future of working in the mines himself, instead joining NASA as an engineer.  Based on Hickam's memoir Rocket Boys (October Sky, an anagram of Rocket Boys, was chosen as the film's replacement title after the studio didn't think women would go to a movie with the original title), the film follows Jake Gyllenhaal's Homer and his friends as they learn to build rockets, eventually going to the National Science Fair with a chance to earn college scholarships.  The movie provides a rich tale of kids struggling to leave their small town surroundings to make a better life.  The evolving relationship between Homer and his father, played gruffly by Chris Cooper, is particularly moving.

Akeelah and the Bee

A fictional story of an eleven year old girl from Crenshaw (Keke Palmer) working her way to the Scripps National Spelling Bee, Akeelah addresses the gulf between socioeconomic classes, particularly when it comes to education, but provides some hope for bridging that gulf.  Akeelah at first makes strides due to her natural talent, but requires the help of her community to fully succeed.  Palmer is supported by Angela Bassett as her mother and Laurence Fishburne as the former professor who becomes her primary coach and mentor.  Doug Atchison's script (which he also directed) looks at why exceptional inner-city youth often find themselves doubting their own talents and points to ways a community can help its young break out of the same old patterns.  In any event, it's a celebration of one of America's few popular intellectual competitions.

Exploration and the Opening of the West

Guardian of the Wilderness, aka Mountain Man

Though now difficult to find, Guardian of the Wilderness is worth catching when it periodically appears on television, primarily on TCM.  Starring Denver Pyle, it tells the story of Galen Clark, an Eastern entrepreneur who ventured west in search of gold and instead found the wonders of what would become Yosemite.  Guardian tells the story of Galen's work (along with his friend John Muir) to protect Yosemite and its giant sequoias from being harmed by loggers and others attempting to exploit the area's natural resources, eventually leading up to Yosemite being proclaimed America's first National Park, with Clark as its guardian.  The movie Galen has several animal friends to help him on his adventures, letting everyone know this was a Disney production.  It's rare enough that I could not find any clips, so instead enjoy this brief TED talk about Galen.

Directed by Lawrence Kasdan and featuring a stellar cast including Kevin Kline, Kevin Costner, Scott Glenn, Danny Glover, Brian Dennehy, Linda Hunt, and Jeff Goldblum, Silverado can be considered either the first modern Western or the last of the great old fashioned epic Westerns.  Telling a sprawling tale of adventure and revenge, the film's true stars are the amazing locations throughout New Mexico that serve as the movie's backdrop.

Baseball is America's national pastime, so of course a baseball movie should by default be patriotic.  But Field of Dreams adds to it an element that touches on why baseball is so central to the American character. There's something universal about the game and its ties to both cities and small town America.  This is underscored in James Earl Jones's famous speech, replayed today at so many ballparks across the nation.

I'm personally more fond of the HBO documentary on the 1980 US Men's Hockey team, but in any case, any movie about the Miracle on Ice (at least any told from the American perspective) ranks up there in patriotism.  This was a team of true amateurs that bonded together to face the best international competition money could buy.  Part of Coach Herb Brooks's approach was to get his players to recognize that playing for their country was far more important than their individual accomplishments or the college teams that they played for and to whom many of them would return after the Olympics.  The shocking triumph over the Soviets and the subsequent gold medal game win would help restore America's confidence after it had been shaken by, among other things, the ongoing Iranian hostage crisis.

It's far from a work of art, but you can't get a more literally flag-draped sports movie than this.  After Russian behemoth Drago kills a red, white, and blue-clad Apollo Creed (who enters the ring to the sounds of "Living in America"), Rocky comes out of retirement to avenge his friend.  The contrast between the cold Soviet sports machine and the idealized spunky American underdog is not subtle.  The ending is never in doubt, despite how hard Stallone might try to make it.  Rocky IV does not score high on the taste-meter, but it certainly belongs on this list.

We'll just forget that Superman III or IV ever happened.  There are no perfect Superman movies, but each of the four listed above do make sure to remind everyone that Superman is probably the most quintessential American superhero that doesn't wear the flag as part of his costume, fighting a never-ending battle for truth, justice, and the American way.  As he reminds General Swanwick in Man of Steel, he did grow up in Kansas, after all.